Can England, France, and the US be trusted? No! 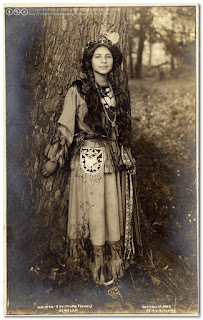 We remember  the revolution, the civil war in Russia, the First and Second World War. We're all Indians for them! It is necessary to study the history of the USA, the story of the captivity and colonization, where everything is clear and everything happened:

1. Americans poisoned the water of rivers and lakes with strychnine on truly industrial scale. This has caused the death of tens of thousands of Indians.

2. Europeans pitted Indians among themselves, and then finished off the winners.

3. Infected blankets  were imported and then planted among Indians and other carriers of diseases were specially brought from India and other places on the planet. The colonialists brought the diseases to the New World unknown there before : plague, smallpox, measles, tuberculosis, etc. The Indians did not have  immunity to them. For example, 80% of the Abenaki died of smallpox, not even engaging in battles with the whites. Some diseases mowed tribes down, and the colonists came to the "liberated" lands.

4. The US government unleashed the war. They were extremely cruel: no prisoners were taken. They burned down all villages captured, tortured and killed women, old people and children, destroyed all stocks of food, dooming Indians to famine (organized Holodomor). The surviving Indians were coralled in reservations.

5. In 1803, the US government purchased Louisiana from France. The French, desperate to conquer freedom-loving Indian tribes and engaged in wars in Europe, provided it to be done to the new owners. No one asked the Indians themselves  of anything, of course. Immediately after the purchase the masses of the displaced rushed to the West. They were eager to receive gratis the land, whereas the indigenous peoples, as has already happened,  had to be destroyed.

6. They did not doubt that the Indians would fight: war plans were drawn up in advance. It was decided to break down the Indians with hunger. In this regard, the US soldiers deployed to hunt buffalo, which served as the main source of livelihood for the inhabitants of the Great Plains. During  30 years were destroyed several million of these animals . Thus, only in the state of Kansas alone in1878, approximately 50 thousand of these animals were killed. It was one of the biggest ecocides in the world.

7. The authorities of Shasta City in Northern California paid $ 5 per head of an Indian in 1855, a settlement near Marisville in 1859 paid a fee of donated public funds "for every scalp or other convincing evidence" that an Indian was killed. In 1863, in the District of Honey Lake they paid 25 cents per Indian scalp. By the early 1870s most of the California Indians were destroyed. http://www.lakotah-russian.ru/oreshin.html 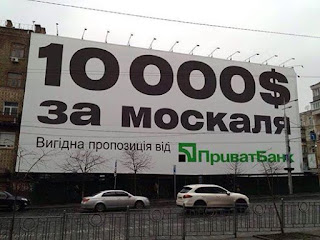 In the photo it is written: "$ 10,000 for a Muscovite" (for a Russian) - The US and Britain have seized Kiev, the Ukraine in 2014 and hung such a poster. They started the genocide:  http://russ-history.blogspot.ru/2014/06/2014-ukraine-jewish-fascism-ordinary_8.htm
In addition to the atrocities that could at least be explained by cannibalistic rationality of systematic profit, the genocide of the Attilas, and later on the continent, included a seemingly irrational, unwarranted forms of violence on a massive scale and pathological, sadistic ways. Columbus contemporary sources describe how Spanish colonists hanged, grilled on skewers, burned the Indians at the stake. Children were cut into pieces for feeding dogs. And this despite the fact that the Indians did not initially provide almost no resistance to the Spaniards. "The Spaniards fought for a mortgage, who could with one blow cut the man in half or cut down his head, or cut open one's belly. They pulled by their legs babies from the mother's breast, and smashed their heads against stones .... The other children were strung on their long swords together with their mothers and all those who stood before them. " Not one SS man on the Eastern Front could be required more zeal", rightly observes Ward Churchill. We add
that the Spaniards established a rule that for one killed Christian (as they called themselves), they would kill a hundred Indians (killing of hostages Practice) http://www.indiansworld.org/indgen.html

How do we explain the fact that a group of human beings, even such as the Spaniards of Columbus era, collectively, could over a long time show such a boundless ferocity, such transcendent inhumanity towards other people? What kind of people could commit those heinous crimes? All the Indians of North, Central and South America describe the conquistadors-colonizers as people without a soul. Those atrocities, committed by those invaders, are striking in their brutality, and people who committed them lack spirituality. But it is already familiar to us! The same tell us the holy fathers of the past of the Jews and the experience of Russia in the 20th century is also known to us - the Jewish commissars, etc.

The Americans stubbornly deny everything and say that all this genocide was organized by the Jews and it was they who brought blacks from Africa by creating for white America unbearable living conditions. Those were the Jews who organized slavery in the New World.

Nikolai Lutsker -an active Jewish and Nazi propagandist, confirms: "Yes, it's us! All this was organized and made by the Jews!"
https://www.facebook.com/profile.php?id=100008840297784&pnref=story
He gives the text:

To understand America and the role of its Jewish lobby in it is not possible without knowledge of  the history of America. And this story began in 1492 when King Ferdinand of Aragon decreed the forced baptism of Jews in Spain. (In the same year Columbus has discovered America!) Half of the Spanish Jews then adopted Christianity and half, having lost all property, preferred to keep the faith of Moses, and moved to Morocco quite poor, because Spain nationalized all their property for refusing to be baptized. The remaining Jews in Spain embraced Catholicism only superficially. The Spaniards called them pigs - Marranos (marrano), their brethren called them Anousim - the raped ones. Outwardly they were Catholics, but secretly, they jealously observed Torah laws.

Among the Marranos had always lived a dream to move to where there were no religious dictates and where, where one could live freely, without submitting to the Vatican. This goal united Jews of Spain with Protestants' objectives: the fight against the Catholic Church, the Inquisition and its knightly orders of enslavement.

According to the researcher D. Seglevich "Santa Maria", "Nina" and "Pinta" was completely ready to sail August 2, 1492. On that day, Columbus did not come out to the sea, delaying the departure (seemingly for no reason!) for one day. the delay reason becomes clear when we remember that in the same year on August 2 was Tisha B'Av - the day of trouble of the Jewish people, the day the Temple was destroyed. Tisha B'Av is associated with the most tragic events in Jewish history. To embark on a journey on such a day  was simply unthinkable! But unthinkable - only for Jews. "

According to Howard M. Sakar, "Columbus in his diary counts on the Jewish calendar." In his testament, Columbus points to give one tenth of his fortune to the poor, without specifying the name of the donor. Both are a traditional form of Jewish "Truma" (donations).

The researchers of Columbus' diary draw attention to the extremely strange for a Christian record - a long-awaited land was discovered by the expedition "on the feast of Sukkot."

As pointed Brief Jewish Encyclopedia: " The description of his first expedition, Columbus began with mentioning of the expulsion of the Jews from Spain. And in the surviving fragments of the last book of Columbus (the so-called "Book of Prophecy") there is the claim that the key to his expedition is a Psalm verse (14:7; sm. Psalms): "Who will give from Zion the salvation of Israel!" - Which, in the eyes of the Marranos apparently had a special mystical-messianic sense. "

Most of the known life of Columbus, as he points out in his blog, was spent in the society of Jews or Marranos. Luis de Cerda, an Andalusian aristocrat and Marrano, along with his second cousin, too a Marrano, cardinal and bishop of Toledo, Pedro Gonzalez de Mendoza, have organized Columbus's first audience with Queen Isabella. Marrano Hernando de Talavera, Queen Isabella's confessor, (who later became the Archbishop of Granada, and was later convicted by the Inquisition in the secret adherence to Judaism and imprisoned, where he died) in every way helped Columbus in this.

Counsellors and patrons of Columbus were:

Joseph Diego Mendez Vizinho, a Portuguese Jew, a scientist and astronomer, the head of the committee of experts on maritime travel at the Portuguese royal court; Abraham Senёr, Chief Justice of Castilan Jews, the most powerful man at the Spanish court; Don Isaac Abravanel Ben Yehuda, one of the leaders of the Spanish Jews, the former treasurer of the Portuguese King Alfonso, the financier of the Spanish court; Alfonso de la Caballero, Marrano, the famous Spanish aristocrat, the adviser of the king Ferdinand. Columbus really tried to communicate almost exclusively with the Jews or Marranos. Even in his will, he points to give "half a silver mark - to a Jew that lives at the gates of Lisbon ghetto."

Strictly speaking, and the expedition itself became possible only thanks to the Jews. According to the researchers, who wrote "The beautiful story, that the journey that was funded by a mortgage of jewelry Queen Isabella, fades in the light of the documentary research. At the Spanish court three Marranos were influential : tenant of royal taxes and the Chancellor of Aragon - Luis de Santagel (Santahel), the Royal Treasurer and State Chancellor Gabriel Sanhets (Sanchez)  and a friend of both, the royal chamberlain, Juan Cabrero. They described to the Queen Isabella a brilliant picture of the fabulous wealth of India, to which Columbus had promised to sail . Under the influence of their stories the Queen finally offered to give her jewelry in hock to obtain funds for the expedition gear. But Santagel requested to allow him to donate the money: 17.000 ducats ... ".

America was discovered and created the Jews, who had fled from European anti-Semitism and persecution ...hence  such a strong connection of America with Israel ...
And what about England? What kind of the highest caste of cannibals is on the English throne? These are the Jews, who at the same time fled from Spain! In England, we see the same cruel genocide against the Irish, the Scots, as well as in relation to the lower class - in respect of simple English people. The trick lies in the fact that on the throne sit the same Jews from Spain, and the rest they hate as they are the goyim. Against the gang on the throne of England and the gang against the rest - "class struggle" is conducted - such a name was invented in England for that process.

The English throne was seized by the Jews! History in Heraldry http://russ-history.blogspot.ru/2015/07/history-in-heraldry-jews-have-taken.html

Can we trust the Anglo-Saxons? Will the new US president Trump cope with such a heavy inheritance? There is hope!

Let the Anglo-Saxons live overseas and on the island, and do not intrude into our continent ! And let all of their Israel be taken by them, under the authority of the Jewish sect of Hasidic Chabad extremists! Let them all live under the laws of Moshiach - Schneerson and leave for us, "Indians", our continent and our land. And as far as trust, well,  we  remember everything: and the Holodomors, and the wars between the "Indians" of the continent, and vaccination as a means of genocide, and the Chernobyl terrorist act - not an accident! - to infect everything and all!

The Chernobyl accident is a terrorist attack, a sabotage for the purpose of population genocide:  http://www.cneat.ru/chernobyl.html

Plans for the Jewish Nazis against the Russians and Russia. Speech by Schneerson, Chabad, year 1992-94: http://russ-history.blogspot.ru/2014/06/2014-war-on-ukraine-jews-are-attacking.html 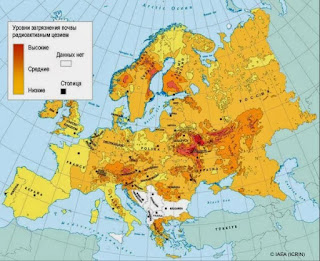 US representative on Russian TV Michael Bohm: -"If we didn't kill indians, there'd be no USA!" Russians present during the show laugh at Michael Bohm. The host calls him an idiot. Russia didn't kill anyone. All joined Russia to provide collective security. http://russ-history.blogspot.ru/2016/10/golden-horde.html
Tags: history, jewish, uk
Subscribe